Maine Teacher of the Year 2014

Karen MacDonald is a sixth and seventh grade language arts teacher at King Middle School in Portland, the most ethnically diverse middle school in Maine.  She has been teaching at King for 24 years and helped transform King into a mentor school for Expeditionary Learning.

"I am proud to be representing teachers throughout Maine.  During 2014, I will have the privilege of  showcasing the strength of our educators and the innovative work that is happening throughout the state.  In addition, I am committed to building enthusiasm for the role that teacher leadership can play as we work to provide the best educational experience for students
in our state and throughout the country." 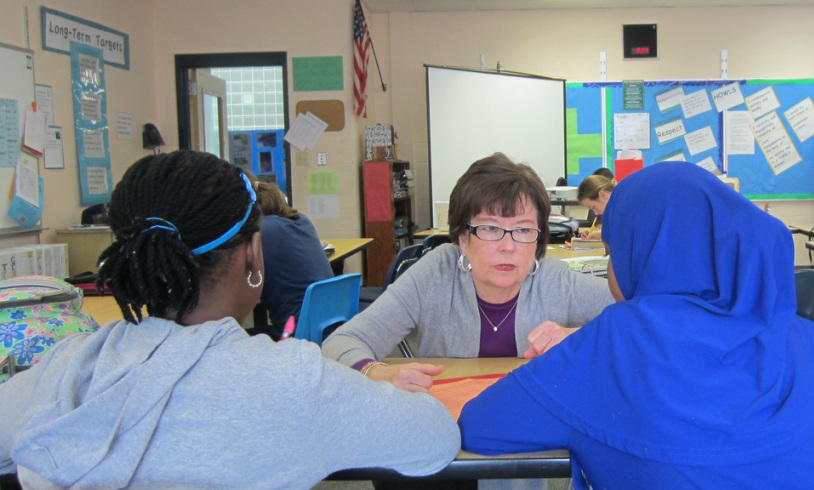 Karen MacDonald was inspired to become a teacher by spending time in her mother’s first grade classroom in Cape Elizabeth.  She began to pursue her teaching career at Mount Holyoke College, where she earned a bachelor’s degree in psychology and education.  After serving as a special education ed tech for one year at Longfellow School in Portland, Maine, Ms. MacDonald was hired as a teacher of Project Exploration, the initial program for gifted and talented students in the Portland Schools.  Karen served as a teacher of gifted and talented students for four years, also serving as the district’s coordinator for the program.  In 1983, she shifted her focus to the classroom and began teaching grade 4 and 5 at Baxter School in Portland.  In 1988, Karen was looking for a new challenge and applied to King Middle School in Portland, where she began teaching language arts.  Around this time, under the leadership of Principal Michael McCarthy, King became one of the first three Expeditionary Learning Schools in the country.  Expeditionary Learning, a school reform model, relied heavily on the teachers in those three initial schools to help develop the model and provide professional development for schools that were new to the model.  Throughout this time, Karen worked to write quality curriculum, train other teachers, open her classroom to interested educators, and share her insight through publications for Expeditionary Learning.
In 1999 Karen left her classroom to take on a new role at King Middle, that of teaching strategist.  In this position, she helped others at the school continue to develop their own expertise around the Expeditionary Learning Model.  In addition, she oversaw the transition to student-led conferencing. The school moved from a school where around 60% of parents attended parent conferences to a school where 97% came into school to learn about their child’s work.  During her five years in this position, Ms. MacDonald also helped host two national conferences for Expeditionary Learning and continued to present to educators locally, in the state of Maine, and throughout the country.
In 2004 Ms. MacDonald returned to the language arts classroom at King.  Due to the rise in the ELL population at the school, now at roughly 30%, she earned her ELL endorsement through the University of Southern Maine, and in 2009 she earned her National Board Certification in English Language Arts/Early Adolescence.  Her drive for continuous improvement at the classroom, building, and district level led her to design a course, sponsored by the district and the Portland Education Association, for teachers in years 3-5 of their career   A cohort from this course emerged at King and these teachers, along with Karen, have led the push to a standard-based system at King, which began in earnest in the fall of 2013.  As a teacher at King, she has had many amazing experiences.  A clear highlight was when four of her students presented at the National Conference for Expeditionary Learning in 2010, where they delivered an inspiring keynote address to a room of 600 educators about their work on a civil rights expedition!  Karen is always ready to be challenged, and each day she comes to King excited to learn alongside her students.
Karen and her husband Terry, a retired teacher, live in Portland.  They have two adult children who both attended the Portland Schools.  When she is not teaching, Karen enjoys reading, cross-country skiing and traveling.

Karen MacDonald is available to speak to schools, community groups and others.
Topics include: